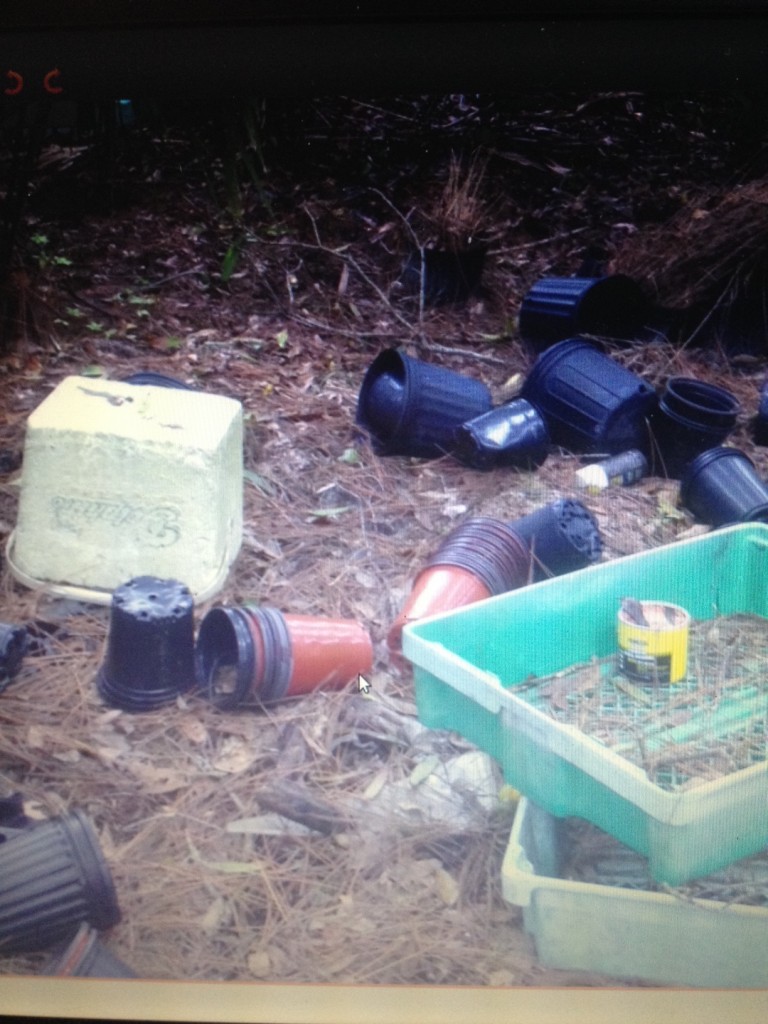 Fox Lake park in Titusville, FL has a hidden secret. Right next to Fox Lake park garbage and debris can be found scattered throughout the woods. The rubbish can potentially have a harmful effect on surrounding wildlife. We found plastic potters, cars, utility vehicles and even a microwave. Is this secret of Fox Lake an illegal dumping ground or just a profitable excursion gone wrong.

Who would leave such a mess behind? Is this an Illegal dumping ground or just a profitable excursion gone terribly wrong ? I encourage you to read the article below to find out more… I have always had a love for the out doors and nature. I love going on hikes and seeing the beauty that nature unfolds before me . Ever since I was a child I developed a woodsman skill that some only dream of. The time I spent in the military only enhanced these capabilities . So when I was offered the opportunity to take a hike with a small group on at Fox Lake I became internally ecstatic.
As we started off I quickly noticed the group was quit unprepared . There was a large lack of foot gear and survival products. Even though this was a small hike we were missing the critical survival items such as water and food. Starting out on the small trail we encountered mud and water. We had to build a minor bridge for the group members wearing flip-flops. After traversing approximately a half mile to a mile we came across our first instructional sign with a map of the trail. After a short review of the map the group wanted to hike to the campground noted 2 miles out on the map so were talking a 4 mile duration peace of cake . Further review of the trail it appeared to be to much water and mud to continue although we tried to find away around as another hiker approached confirming everything was a total wash further down the trail .

The group quickly returned to the sign with there minds grasping for the beauty of nature but feeling let down . After a few seconds of conversation and reviewing the minor sign to the rear that had an arrow pointing one way for hiking the trail and the other bike trail . After my quick visual of the terrain I noted to the group more than bikes travel these trails as you could clearly see truck tracks embedded not just in the mud but the grass as well. But clearly the group was starve stricken of Gods natural beauty and longed for something anything that would amaze them an be engraved in there minds as a moment of awe. So the group decided to push on turning to the left there was two choices . The straight away trail still covered in a bit of mud and a trail to the immediate left .
The trail two the left appeared to give some immediate advantages .
1 ) It appeared to be a nicely packed trail with no mud or water just right for the foot ware the rest of the group had on .
2 ) Being good with direction as part of my survival skills the trail appeared to be leading back to Fox Lake .

As we traveled down the beaten truck driven path we ran across a plow siting off the side of the path and then came to clearing and then at that moment shock and I am sorry to say some minor flash back moments took place .
In my life time I have experienced many things some not to pleasant .
Although luckily nothing to extreme but none the less the first site of this area looked war torn .
I abrasively jumped into a visual mode as I stopped the group looking for signs of other people as well as signs possibly posted for no trespassing to which I found none .
The group quit set back as I was myself urged to push forward I agreed only with the understanding everyone remain quit and pay attention to my motions of stop and go .
This first area almost reminded me of a homeless camp of some sort or maybe something out of zombie movie with an abandon rusted out tractor trailer rusting away filled with old cabinetry and all kinds of empty flower pots . As we proceeded we came upon a second clearing and with my perception the area seemed to be a little more utilized with less pine needles covering but tones of plastic pots lie every where some were in good condition but most were deteriorating .
Then noticing a lot of water jugs you know the kind that you would find in the office most notably the office water fountain .
My first thought was they must have Ben growing marijuana but after further looking around I noted they were growing a type of shrub grass .
As we looked further we found an abandon tractor , truck and microwave amongst other things . Before I proceed with the possible affects I would like to note this area is visible from Google maps satellite view . Satellite view and reference point To the secrets of Fox Lake .
This is the rotting tractor trailer filled with counter tops and shelving

You must use the pain in the lower left of the screen and put it in satellite mode and pan slightly left of Fox Lake .
I decided to ignore the rusting tractor tailor and other vehicles , microwave and other debris and limit my concern to the plastic containers and pots . Noting the fact that Fox Lake is ware some enjoy fishing and the area is high pron two wells for drinking and other uses .
Some cities take plastic pots in there recycling programs but most only take black because the other colors contaminate all other plastics although it has Ben stated that lows or home depot will take them .
That being said in it self should bring a heighten concern .
But there is more to think about here we are talking birth defects cancer and other drastic diseases that effect our community as a whole .
There are many effects to our whole Eco system here .
How dose this happen well we have any given animal scurrying for food and they eat the parts of a plastic pot they die or are killed by another animal For food the supposed chemical moves up the food chain .
Say if a dear eats the plastic and then a dear hunter kills a dear any contaminants the dear has eaten enter whom ever eats the dear .
Straight out of the archives of scientificamerica I give you the findings of plastics in our Eco system .
If you read the article there are some key notes here for example but not limited to .
1 ) These plastics although may look as there crumbling and one might think there degrading there products stay in the ground for centuries to come .
2 ) A reaction called leaching from buried plastics can seep into drinking water ( I. E Fox Lake and any given well in the area ) and is transmitted threw human absorption .
3 ) The given studies suggests that although we have these chemicals in our body all ready due two the common use of them over exposer causes birth and developmental defects involving the brain and physical growth discovered in boys ( genital area ) .

I am not saying that anyone has Ben harmed from this debris or that anyone will but I am merely pointing out it could be detrimental to our community as a whole and contribute to birth defects whether from an animal perspective or human .
Also noting this particular area of Fox Lake and surrounding dose appear to be in a what I would think protected wet zone area although I could be wrong .
The group was quit taken back at the whole hiking trip but unfortunately it was not my worst and luckily it wont be my last .
The least that could be done would be to properly post areas as well as gate them .
The best solution and outcome for wild life and humans alike would be to clean the area up .
This is only one deep hidden secret of Fox Lake I am sure there are more hopefully none such as this .
Because Florida is a tourist state who knows whom could stumble across this next .
Peace have a great day riding the wave of the HIDDEN FOX LAKE SECRET .