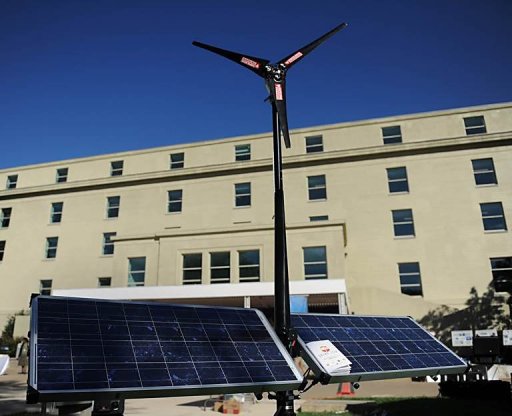 Green military is it Possible

Of course it is possible but then we are left with a few other questions how feasible is the Idea and if so how far to this approach have we gotten if at all ? What if any factors hold our governments at bay in proceeding with such procurement’s ? All interesting questions but in my own mind it is quit visible that the advancement into drone usage has went into this specific area . One could only summarize of the scars that run deep within the given soldier and the separation of said scaring do to the fiscal sight of the aspect of war and death there in . The reason I bring this up is it shows the ripple effect that has held this development of this technology at bay as instead of improving transport of soldiers the move has been to replace them . In the midst of this replacement would come robotics with full capabilities of green power solutions and at the same time remove any human emotion and or responsibility . Some would argue this would end the crippling disease most war torn veterans fall into eliminating any guilt factor . Some would also argue the mere fact of doing this would cut medical bills for veterans across the board but this is a very small figure if we consider what is spent on fuel . Sure enough having the Military go green is not a knew Idea and was thought of way before the Obama administration .

The Idea of having our military go green is not a new Idea and has been around for quit a while and I am almost sure that drone usage and other none fossil fuel vehicles has took a chunk out of the cost . Some may also argue that teaming with the United Nations offset cost and this could be so none the less it is just a band-aid to a much bigger problem . The pure essence of having our military rely on fossil fuel to provide protection for our country against any enemy keeps the war for oil and other fossil fuels ongoing .
The war for theses fossil fuels causes new injuries as fracking and the delivery and removal of said containments continue . These procedures destroy soil and water the two things we need not only to survive but also to grow food and feed livestock . The answer to this from most is owe do not worry about it move livestock and growing procedures inside to a simulated area along with watter purifiers .
The organizations that produce such fossil fuels are just pawns of a procurement and want pushed threw a safety initiative for strength and protection .

Has the military ever thought of going Green You will be surprised how far the military has went green but we still have to push past the hybrid .

Well the answer to this question is yes they have in most recent years the Obama administration had actually implemented some structural foundation for this to start happening . The thing that bothers me the most is the fact they keep pushing the climate agenda while the scientific community had corrupted many parts of data . I am almost lead to believe the climate issue was created to make the issue bigger and harder to handle so as to move Fracking in kind of like a magic trick and a way to divide and conquer . Enough of the reminiscing for information on this please see the following link straight out of the archives of Politico I give you JAMES MATTIS CLIMATE CHANGE TRUMP DEFENSE .
I am sure these Ideas have been around for quit some time but all hampered in the name of greed and profit . To partially prove this point please see the next video that was posted in July 2014 on electric military testing vehicles .

Imagine if our troops heavier equipment like tanks plains and ships had this type of technology what would it do for them first let us take a look at the power of newer tanks enjoy .

How could this begin well it has already as you will notice in this next hybrid video enjoy .

This next video shows how all this could be put into a military vehicle for heavy use enjoy .

But really why would we want to do this wouldn’t our troops have a lose of power and opportunity during engagement in the battle field ? The answer to this question is no and it would actually do the opposite and give them the upper hand in many ways . To prove this point please see the following video on the military breaking away from fossil fuel .

Sure enough this is a step in the right direction not only to aid and help our military get the job done as well as stay at the ready . This also will help put an end to a century old war that is now in our own back yards killing many and causing many diseases . The procedure of harvesting fossil fuel by fracking and other means being labeled as a ( NORM ) procedure and regulated by the EPA according and I quot from wikipedia . The inability to control disposal procedures do to the greed for profit and the need to keeps are soldiers at the ready keeps many hands tied the removal of the military need would enhance the end to this war . This is why I am saying we need to enhance military Technology in this field and I believe it is a challenge for us all . Or we can continue to shoot each other with rubber bullets and inadvertently harvest radium and other radioactive materials that contaminate water , land and when it drys goes into the air to be digested threw inhalation . Think this is not true well look it up yourself also see what other countries are saying or we could just role over say goodbye to our local farmers and eat and drink everything of GMO products . Have a nice day while riding the wave of MILITARY GOING GREEN COULD SAVE TRILLIONS I am out .

Army Corps Of Engineers Who Needs Them