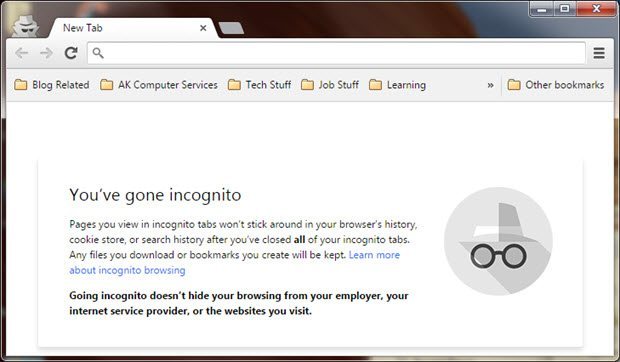 Browsing Incognito what dose it Mean Incognito and or privacy mode dose not mean no one can see you .

Most think Incognito means private no one can see me I am invisible hence the definition of Incognito which in simple terms means you have dropped out of the site of humanity .

For this straight out of the archives of wikipedia I give you the definition of INCOGNITO . Although in browsing terms this could be magnificently miss leading for many factors and to be totally honest I have never felt the need nor want to use a Incognito or private browsing . Knowing this to be true meant one thing it was time to do some investigating homework in order to write this article which is not hard for me being I do this with all my articles even if I think I know it all . The terms Incognito or privacy may be slightly miss leading but before using any software you should do your homework .

Who dose this effect and why this was the question ? Well this is partly where this article has stems from but before I get to that I posed a question to a reputable IT professional . The question asked , Do security officials and large business corporations use Incognito or private browsing as a security feature and the simple answer was ( NO ) . Being that said I will now divulge were this article stems from , As I was looking for something new to write about a security concern crossed my screen from none other than venturebeat . Although they are representing it as a bug within the browsing sector that specifically targeted Nivida and AMD graphic cards . This particular security issue was reported to all the officials concerned and according to venturbeat the result of this reporting lead to finger pointing to shrugging off and being marked as wont fix with some . So without further delay straight out of the archives of venturebeat I give you the INCOGNITO BUG . After reading this article I was like what are you serious I was absolutely spun around in my computer chair , I mean this issue could effect a guest-imitation of let see ( 1.2 Million ) . Hmm I had to investigate further because it is not like everyone to be just shrugging off a bug and or security risk and marking as will not fix not to mention it was the first one I heard of .

How private is Incognito Diablo 3 is how the bug in incognito was discovered . But any number of software could potentially cause a similar event

How private is Incognito and or private browsing this was the pivotal question and the second question was did venturebeat jump into an article without doing there homework ? Well the second part of the question is the hardest to answer for two reasons , one maybe they know something I do not and two I am not them . Discovering Incognito brings us first to a page of none other than wikipedia most notably called privacy mode . If you scroll down two security on this page you will see between the time from 2012 to 2015 there has been security risks and some violations noted . These issues basically stem from extensions and other software the computer user installs on there computer or device ( meaning I believe technically not a browser issue ) . At the beginning of this page it states and I quote private browsing is only a shield and dose not mean total privacy . Without further delay straight out of the archives of wikipedia I give you PRIVACY MODE . So it was on to yet another page this one put out by none other than Google Support and after visiting this page it pretty much put it into perspective for me . Without further delay straight out of the archives of Google Support I give you INCOGNITO MODE . But if you find yourself at a need to possibly use Incognito Mode here is a nice video to show you how to proceed with this shielding option enjoy .

One thing is for sure the name Incognito and or privacy mode browsing may be slightly misleading but that is what homework is all about . Before installing anything on a device or system homework should be done especially one that has such a claiming name in order to make sure it will function how you want rather than how you think it should . The bottom line you are your security officer of your device and in this world of back-doors who would of thought the front door was and is left open . If your in charge of a large company and using Incognito or privacy mode as security measure you better check yourself .
Have a nice day riding the wave of INCOGNITO MODE I am out .

A Rant On Security

EFF Dose It Again And Brings It All Home