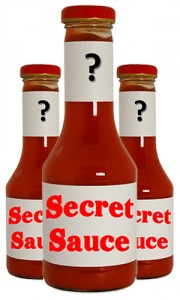 IBM thinks of it as Eureka

IBM a company approximately 97 years old or better and in many parts the back bone of what has made this nation great as it is today . Even though IBM is such a magnificent part of America they search to keep revenue and there markets strong with stability for economic growth . They are constantly hiring the occasional intellectual scientist with this degree or that and purchasing this company or that . Do not get me wrong these are all good qualities for any company but without the secret sauce growth and financial stability will plummet . Once the secret sauce is discovered than you can say ( Eureka ) I have found the ( Secret Sauce ) the gold mine that will keep this company thriving and well . So I guise the Question is did IBM accidentally fall into the secret sauce and to this day they as a company were not even aware of what it was ?

IBM searching for Eureka without the Secret Sauce I have followed IBM for years grumbling here or there to myself what are they thinking wondering wen they would emerge and recover becoming the house hold name again . I would like to point out even I as a struggling writer I look for my secret sauce but in any secret sauce acquisition there are guidelines of integrity it is like the ( seasoning ) of the sauce . Grephaxs is still at an age approximately two years going three so we are still stirring our sauce and are there secrets yes highly classified ones as with any company big or small . So why would I care about IBM ? Well think about it , once they were back bone of the nation . Giving your grandparents stability in the work force and the systems we greedily use today . There would be no computers or networks as we know them today without IBM or at the least they would have been a lot slower in the making . This article was inspired by an article on linkedin although I was about to share the secret sauce within a comment linkedin software failed me whether I was being censored or not I am Unsure . Without further delay straight out of the archives of qz I give you IBM SEARCHING FOR EUREKA without the secret sauce .

IBM and the lost Secret Sauce The Secret Sauce who has it ? Google , Apple and Microsoft just to mention a few of the big hitters that may appear to be barking at the heals of IBM for market and revenue space . Many companies have a secret sauce all you have to do is look at climbing or falling revenue . It took me a little less of a nanosecond to discover and reaffirm that the secret sauce comment I was to leave IBM on linkedin was absolutely on target . The article searching for eureka if you read the whole thing spoke to me as if there was low moral and the company was crying for help in some odd way . The secret sauce per capita will very although will be similar in nature between companies and yes I studied in business management not that it matters or at least it should not . So lets get to the root of the sauce ( YES THE ROOT ) the beginning were the sauce was first being put together . So my first thought was to do a search on the history of IBM to see the amazing result of this straight out of the archives of wikipedia I give you the HISTORY OF IBM . But wait this is a great history although it dose nothing except reaffirm my knowledge and writing at the beginning of this article . I thought well that is great but I felt I was still missing something ( what was it wares that secret sauce ) I mean I could smell the sauce it was fuming up my nostrils ( As I read IBM has done this or that ) . This was really starting to burn my ( diodes and nano tubes ) and then it hit me I actually learned something from the Eureka article that I have never known . It hit me so hard it was like I was ( Quantum-Ly transported into a wrestling match with the Rock ) and he points at me and says I quote ( CAN YOU SMELL WHAT THE ROCKS GOT COOKING ) . The article had pointed out IBM had been involved in creating of all things meat cutters ( This This ) reached out and grabbed me . There must be more history to IBM than I am aware of ( and just like the IBM physicists and intellectual people of IBM I two did not know all of what should be known about IBM ) . Any good chef knows if you changed one ingredient you change the whole recipe the flavor the oder the per essence of ( MOTHERS COOKING ) .

IBM did they forget an Ingredient

To find the missing ingredient for IBM first you must travel further back in time to the Bundy Manufacturing company . That is right Bundy two brothers who started it all although they have had disputes within there family ( which hopefully none of this stills causes conflict in the company ) .
IBM would not be here today if were not for these two brothers in order to prove this point straight out of the archives of wikipedia I give you the BUNDY MANUFACTURING COMPANY .
But wait there is more the museum that is right not just any museum the Bundy museum without further delay straight out of the archives of the bundymusem I give the BUNDY MUSEUM .
Awe can you smell it can you feel it yet ? ( the gravitational pull of stocks rising ) take a deep breath .
IBM acquires video company good move but what shall you ever do with it ? Without further delay straight out of the archives of ZDNET I give you IBM acquires clear leap . So after all this if not one of your scientists and or any of best team of investment advisers still do not know what the secret sauce is ? Here is a riddle for you and you can even ask Watson ( what dose GOOGLE , Microsoft , Apple and Walmart have in common ) ? Now one thing to keep in mind as each of these companies stirs the sauce ( ingredients can be lost ) or wen a knew part of the sauce is created an ingredient such as but not limited to ( integrity ) can be lost or forgotten . Just like Guy Kawasaki wrote about Apple stirring there design sauce straight out of the archives of Guy Kawasaki I give you Apple and there design sauce stir .
The video below is just a partial video in listening to the CEO of IBM there did not appear to be anything different she was saying than any other company other than IBM has plenty of money and strength .

I guise this is the final moment where I am suppose to lay it on the line and give you all the answers well I might not have them all I can only talk about what I see and what I do not see .
1 ) Roots very important ( two brothers 300 employees )
2 ) Family within the organization ( not necessarily related but the structure and treatment of such )
Google has done a great job in this area with not only there employees but customers alike .
3 ) With the family structure comes youth ( youth and the none stressed and without diploma )
This is ware new IDEA are born a person past a certain intellectual point can not even bend a knee to here a youthful IDEA or he pushes aside that janitor working not knowing he might actually know something . So in the world as we know it wen children start there vocabulary it is something like this ( Mommy , Daddy and Apple or Mommy , Daddy and Google ) it could be ( Mommy , Daddy and IBM ) but not without the proper secret sauce . Many may argue the Bundy brothers do not matter it was a purchase acquisition then there intellectual values have gotten in the way and they miss the whole point . If you say well were doing all this I would say really restructure your marketing program my mouth should be overflowing with IBM material . I myself even though I studied business management have never done consultation for a business and especially one of the size of IBM but I do know someone who dose . This company is small but at a steady growth and the gentlemen who run this company are well in tune to the younger and older generation . If any company or person that has a dream these are the guys to call they make dreams come true let them put the secret sauce in your business either through consultation or building from the ground up . Straight out of the archives of Dynamic Bit Technologies . @ www.DynamicBitTech.com
Have a nice day riding the wave of IBM and the search for the SECRET SAUCE .