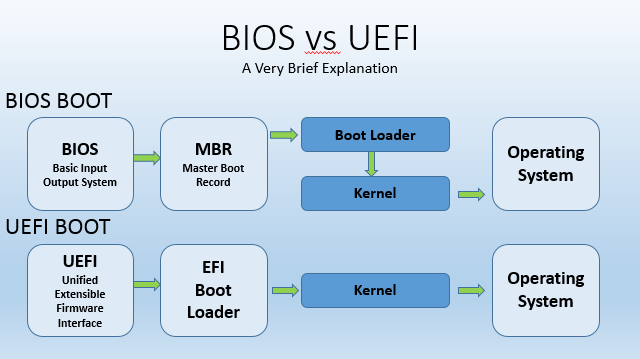 Computer BIOS most know the term by Now

Most people these days have some understanding of computer BIOS and the function and purpose for BIOS . Although there is a lot I am almost positive about that even the most keenest of computer operators do not know everything about BIOS in any given system . Remember you are in control of your ship you are the commander when you hit the on button a message is sent to BIOS to boot the machine IE the computer . In the past BIOS was just simply basic and instructed input and output devices but throughout the years just like any other product software or otherwise became outdated and size restrictive . Some show the EFI in BIOS firmware as being the boot loader while others proclaim UEFI to be its own OS ?

Some make the argument that the BIOS firmware system and structure has been overwhelmingly slow thus updates and function control usage was well needed to handle new graphical and memory sizes . Thus has brought about the use of BIOS updates called EFI and UEFI but not without a struggle between OS manufacturers like Linux and Microsoft . Of course this is not the only struggle the concerns were brought fourth about the loss of user control and the on slot of security breaches that are still going on today as I write this . Hackers that administer these breaches are not the only thing to be concerned about as within itself somewhere between the new EFI and UEFI and the elimination of EFI and older BIOS could create a conflict . In general computer terms what I mean by this is when you have two peaces of software that pose a malfunction . This article is intended for both the heavy ( GEEK ) and light hearted surfer and or gamer but I will warn you if you see any instruction in this article and do not know what your doing ask someone who dose to help you . There are a lot of great places and people like for one example Ubuntu forums or other Linux forums specifically geared for your distro .

What is BIOS and EFI UEFI Back in the day firmware was brought in through the use of a floppy disk drive .

So what really is the BIOS and what is it supposed to do and I know it sounds like I am back pedaling but it is always good to see for yourself other than take my word . So please see the following link straight out of the archives of wikipedia I give you WHAT IS BIOS . So that is pretty much straight forward to get an understanding of EFI and UEFI please see the following link straight out of the archives of wikipedia I give you WHAT IS EFI UEFI . In the midst of everything it appears everything is great but it is best to consider how this all began in the first place in order to understand where we are today . In the early days of computing a floppy disk was the only way to bring the firmware up to communicate with the BIOS through CMOS . I think the reason for this was when building new hardware using the what they call lower end programming language there was limited space availability to tell the hardware its function . By bringing the firmware on-board as a regular peace of software gave the capability for bridging allowing more accessibility and features . In order to understand what I mean please see the following link straight out of the archives of the informit I give you BIOS AND CMOS CONFIGURATION . There are two things that seem to be most pertinent one being freedom to control ones device and the other being business . In some aspect ratio these two elements work hand in hand although I will not dwell to deeply on that specific relationship . In the early years of Operating System development you know like back in the IBM days . IBM had a sort of lock down on there BIOS so any development had to be reversed engineered so as the OS could communicate with chip-sets during the boot process . Once this was achieved is when other computer manufacturers took hold and that is basically how we got to where we are today with many computers and operating systems . Also I found this other link that gives a slightly different definition to UEFI I Quote ( he states the UEFI is actually an OS on top of the firmware ) . For this definition please see the following article straight out of the archives of IT world I give you GOODBYE BIOS HELLO UEFI . So that all sounds good so far but what about the conflict and how could it effect you and your system ? BIOS and the Operating system and the precious golden key .
Thought to be the holy grail of computer access .

So the next question that comes to mind is were they given a golden key and if so whom else has it and dose it relate to some of the latest hacks that have just occurred ? Looking at the Apple Mac high end sierra hack that just happened . If you had not heard about it straight out of the archives of techcrunch I give you ANYONE CAN LOG INTO A HIGH SIERRA MACHINE . This next article is from 2015 so they have been aware of this for sometime or so it seems but remember follow procedures at your own risk . For further reading on this please see the following link straight out of the archives of imore I give you MAC WHAT YOU NEED TO KNOW . You can clearly see this is an EFI/UEFI hack whether administered through a golden key or through the same tactics to unlock the Apple phone I am not sure . For even further reading I ran across the next link straight out of the archives of macrumers I give you MACS HIGH SIERRA WEEKLY EFI SECURITY CHECK .

Keep in mind I am not saying these advancements are bad as a matter fact they are quit exciting and sometimes to balance things out there unfortunately has to be bad with good . The bad parts being that the firmware itself localized as an easy peace of software opens the door to many orchestrated hacks yet to be seen . The upside is the fact of communication size difference to which is well needed within the gaming and video segments of our computer society . But there are other things to consider here as well this type of update has been needed for sometime so the mere question is why now ? If we think of other things going on in the technical world as we know it today there is the IOT Internet Of All Things and smart cities to be developed as well Quantum computer bridging to be done . We must also consider cloud infrastructure building all these things will need a much higher sized capacity in order to keep end user and other structures operating seamlessly and happy . Going from a EFI to a strictly set UEFI sounds like it may cause some compatibility issues what those issues are are yet to be seen and explained . There seems to be more that should go with this article but to be honest I found it hard to find proper information regarding some of the topics . The best thing you the reader can do and yes I said ( YOU ) is to do further research for yourself . I hope you have enjoyed this article and learned a few things or at least brushed up on them and that you are as excited as I am on what the computer future will bring us . Thanks for riding the wave of BIOS END OR JUST THE BEGINNING WITH EFI EUFI have a nice day I am out .

Man In The Middle Attack

Computer Language Of The Forgotten